Time to first maintenance or DBR, is defined as the time to 5% rusting of the steel surface.
The gabion structure at 5% rust still holds the rocks in place, so is still structurally sound, for many years after 5%DBR (Dark brown rust) stage.

Good drainage behind and below your gabion retaining wall will not only improve the retaining walls stability, it will also increase the expected design life of the gabion wall

In the United States there are areas where local conditions create an increased likelihood of corrosion. Special consideration should be given to material selection and design in these areas. They include:

Within 1 mile of the coast, characterised by:
Light salt deposits
A frequent smell of salt in the air
In the immediate vicinity of large expanses of calm salt water such as harbour foreshores
This environment may be extended inland by prevailing winds and local conditions.

Within 500yds of corrosive industrial emissions and subject to heavy fallout from them.

When constructing gabion retaining walls in strongly acidic soils (PH over 5.5), the soil and the corrosive groundwater must be separated from the gabion structure by using geotextile fabrics and a properly designed drainage system.

1/ it forms a corrosion resistant coating over the steel, that protects the steel from oxidation.

2/ the galfan serves as a sacrificial anode, so even if the coating is scratched the exposed steel,  does not rust while the ZnAl is present

Aluminium and zinc are used as sacrificial metals. They are more reactive than iron and lose their electrons in preference to iron. Therefore there is no need to protect the cut ends of the gabion wire, or worry about small scratches to the gabion during construction.

1/ PVC coating does not improve the gabions resistance to damage from flood debris impact.

Rock impact tends break wires instantly and the thicker the wire the less likely this damage is to occur.

PVC-coated wires usually performed better than zinc-coated wires in severe, natural exposures. They showed very little to no strength loss for about 13 years, although wires were in early states of corrosion. Because the bond between PVC and the underlying metal broke after cycling through temperature changes (daily or seasonally), a capillary space formed, where electrolyte migrated, and then corrosion started. In continued severe exposures, we expect that PVC-coated wires will continue to corrode, possibly disintegrating within the confined PVC sheath, or expanding and breaking the PVC as corrosion compounds form.

PVC has a smooth and shiny surface when it is newly manufactured. After about 3 to 5 years of exposure to sunlight, PVC photo-degraded, and it became dull and got chalky. Simply described, photons (incident light) displaced chloride ions in surface molecules. Plasticizers may be added to PVC for flexibility. After about 7 years at site 7, the surfaces of sun-exposed PVC coating developed cracks. As plasticizer compounds volatilized, PVC coating shrank and cracked. Among the sites where test panels were submerged in either mud or water, PVC did not become dull, like sun-exposed PVC. Instead, PVC hardened and often discolored by reacting with its surroundings.

Once the PVC coating is damaged, the gabion then relies on the Galfan coating to prevent corrosion.

The images below are of PVC mesh that was damaged in transit, before gabion assembly and prior to the rocks being added. 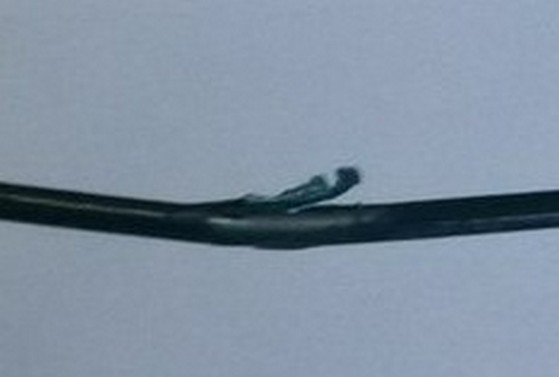